The Porcelain Project: a (mis)communication across objects and space

Grace Ellen Barkey and Eleanor Hadley Kershaw take a seat at a table outside the Waterside Café, Barbican. The fountain on the other side of the patio is gushing and people at other tables chatter happily over coffee in the afternoon sunshine. Eleanor places a tape recorder on the table between her fizzy water and Grace’s tea. They start to discuss Spill: Overspill and The Porcelain Project. The conversation quickly turns to the story of the performance’s evolution.

Grace: I work quite intuitively. I don’t really think beforehand, “what does it mean?”. I consider it more like when a painter paints. Just go [she makes a hand gesture to suggest throwing] with the paint and the white thing. You have all your luggage with you, all your knowledge and your life and your dreams and you just go for something… 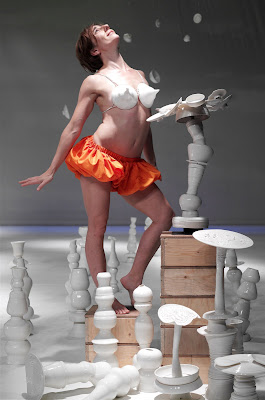 I always tell the story that Lot, my partner in crime, and me, we were having a bit of time off… and we decided to do something small. Lot was a ceramicist, but she hadn’t practiced for years and years and I don’t know why but she started to study it again. I am a very big fan of porcelain, I just love to touch it, and in a flea market I always go to the cups. I have a whole collection of the most fragile cups, the more fragile the better. I think we [envisioned] a picture of a Louis XIV-style room - a room full of porcelain - and we said to each other, let’s do something with it.

For me, theatre is a puppet theatre, in the sense of the absurdity and the grotesque nature of a puppet play; [where there might be] a kind of strange repeating, like “children did you see…”, and then something pops up there [she makes a hand gesture like a hand-puppet popping up]. I said to Lot, let’s make a puppetry of porcelain, but really recognisable things like cups. So Lot started to make all the pottery. [We built] a little temple; on this platform there were porcelain things standing and hanging, and we would pull on wires and all these [pieces of porcelain] would move. For example, there’s this snake of cups moving [she makes a hand gesture to suggest a rolling wave]. It’s just like a dream of little objects moving. We still show it sometimes in museums, this little manipulation of the porcelain, it takes like 10 minutes. So that’s how it started…

And when it was my turn to do a big production, at first we had another idea for a setting, but because we had so much porcelain we said, “we have spent so much time already with this porcelain, so let’s just throw it on the big stage and see what happens…” And that’s how it grew.

Eleanor: Is the relationship between the audience and the porcelain the same in the installation and in the performance?

Grace: It’s completely different. The trembling table that you see on stage is also in the installation. When it starts the people come in and they see all this porcelain falling and they can come much closer, they can express their curiosity differently. They go and look at the table and try to figure out “why does it tremble?” and “how does the porcelain fall?”. They are already completely into it before we even start the manipulation. And during the manipulation they come very close, very very close. It’s very light. And the porcelain has a quality, it’s very tender, it is beautiful. The music of it is tender.

Eleanor: One of the things that we noted in the performance is that the porcelain is not porous, there’s no way of getting through it. It feels like it’s getting between these bodies. We wondered whether you see the porcelain as something completely exterior; external to the body? Or do you see it as a representation of something more internal?

Grace: Of course, it’s not only an external thing. When you make theatre you are instantly telling something, in some way, even if the performance is abstract. You have the space, you have the time, you have the whole aspect of theatre: you are telling a story. What I try to do together with the dancers and Lot, is to create something new. 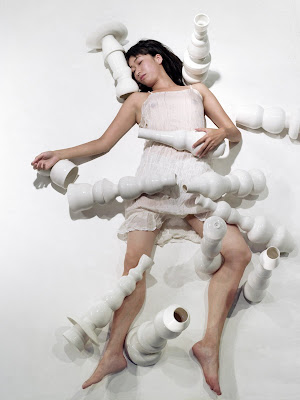 To trigger fantasy, to show that you can come up with something that doesn’t exist yet. The material and what I try to say grow together in relation to each other; it is something that I completely trust. It will tell a story whether you want it to or not - it is there. I sometimes say it’s kind of a meditation. To create something, you just have to go into it and try to open yourself to all the possibilities. And of course I have limited time with the dancers, I don’t have years and years. So I have to begin with an idea and very soon they start to understand, and come into my meditation too. We are working together, and this whole new world grows.

Eleanor: The porcelain seems to almost create a language of its own – how would you describe this language? Would it be very formal and ornate, or sketchy and in note form, or something else entirely?

Grace: I’m not so good in words, I really think in images. If it is a language it is a physical one, and of course there’s the sound that the porcelain makes. This is almost like a presence for me. The porcelain as an image is very present and I am always surprised to hear it. It’s such a beautiful gift of the porcelain to make sound.

Eleanor: As much as I enjoyed the performance I also found it quite unsettling, specifically when thinking about the colonial connotations of the porcelain…

Grace: My work is really about the absurd and the grotesque: the poetry of the theatre, the mythical figures that represent the good and the bad. The mythical figure becomes human, and the human figure fails. It is always disturbing and always funny to see human people trying to communicate and failing. And along with the porcelain, the mythical figures and the kings are an excuse to trigger something; to do something else with time, with material, to play, to invent. So the kings were a fascination because it’s such a terrific question – what is it to be a king? It’s a shame that there are no good kings any more. A good king should be on the square every Sunday and… dance for the people [laughs]… And why do all these kings go so crazy? To go so far in their rituals and to get so caught up with this absurd life they’re living.

Eleanor: This really came across in the performance – they’re so overindulgent and decadent that their world just falls apart and becomes chaotic…

Grace: And at the same time it’s a fairytale, the king and the princess and the frog.

Eleanor: And in creating the show you were “playing” and you see theatre as puppetry. As an audience member, you get the sense that these beings on stage are almost like children, in the way that they’re teasing each other. They often look at us for our approval; they’re playing to us. I felt very implicated; that they might not be doing that if I wasn’t watching. And when the movement becomes disturbing and sexual, I felt responsible for this descent into chaos. It’s a very interesting relationship that the performers establish with the audience by continuously looking back to us.

Grace: It’s a weird choice to make: are we going to look or not? And that’s why we put what we call “soldiers” [line of tall vases] at the front of the stage, so that they can’t come out, so that they can’t escape. So that we ask the audience just to look and say “what the fuck are they doing?!” It’s important to feel an energy that’s completely useless, because that’s what we are. You would look down from there [gestures to sky] at us and at how we fight each other, and how this one is for this god, and that one is for that god, and the people on the other planets would say “what the fuck are they doing?!”.

Eleanor: So you’re putting the audience in the position of looking in from the outside, from “outer space”. 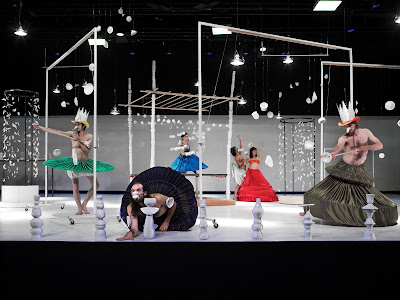 At the end of the performance one of the vases broke. It was very shocking, and it brought back the idea that the porcelain is so fragile. We wondered whether that moment was intentional?

Grace: No. But every performance something breaks. We don’t know when and we don’t know why. It can be that something tinkles too hard, or somebody stumbles over something or several things, three or four things.

Eleanor: It really is unpredictable – as life is.

Has something ever broken in a way that has made it difficult for the performance to continue?

Grace: Well if something breaks there is a broom and Misha, in character, can come and clean it up.

Grace and Eleanor continue their discussion while finishing their drinks. They shake hands and smile. Eleanor exits through the café. Grace exits across the patio. A waitress enters from the café door and clears Grace’s teacup and Eleanor’s water bottle onto a tray, then exits.

Mary Kate is a freelance writer on performance and live art, based in London.

Eleanor Hadley Kershaw is a writer focusing on performance and live art, currently based between Brussels, London and Bristol.ehadleykershaw@googlemail.com