An Awful Responsibility by Mary Paterson 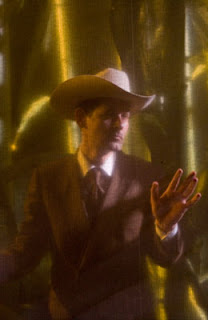 At the start of Inferno, a line of Alsatians is brought on stage and chained up by the footlights. They bark and growl and snarl at the actor behind them – Romeo Castellucci, the director of this work. Suddenly, like the crack of a whip, a dog runs on from the sides and attacks him; then another; then another. The dogs sink their teeth into Castellucci’s padded armour, shake his limbs, pull him to the ground. The Alsatians at the footlights watch with frenzied excitement. Growling, snarling, yelping - they are baying for Castellucci’s blood.

There is a violence in the relationship between audience and performer, and Castellucci knows it. He knows that we are watching, waiting, willing something to happen.

In Inferno the figure of Andy Warhol – our Virgil, our guide for this trip to the Underworld – points accusingly at the audience as he writhes on stage in agony. He takes our photograph to the sound of an almighty flash, like the sound of worlds breaking.

In Purgatorio, the audience is made to feel complicit with a scene of unspeakable abuse. The words of a script are projected onto the front of the stage which, for a while, enacts the audience’s control over what we see. We know what the actors will do minutes or seconds before they do it, then watch the inevitable play out like a familiar punch-line. But when the script diverges from the events on stage, this relationship becomes an appalling indictment of the audience’s desire for theatre to perform. Put bluntly, we are waiting for something to happen. If the something that happens is horrific, does that mean our expectation is horrific as well?

In Castellucci’s trilogy of heaven and hell the viewers are not just spectators to the worlds conjured up; we conspire in the conjuring act itself. Castellucci creates a waterfall of images laden with meaning, but whose meaning is never resolved.

A white horse, covered in red paint, makes a horde of people back away in fear or awe.

A woman chops carrots in the stifling, noisy silence of her suburban home.

These are symbolic images that symbolise nothing (yet). They are like floating signifiers – terms that mean something, although it is not clear what they mean. In order to make sense of them, the viewer must season these images and wash them down with a few more of her own.

And yet instead of floating, Castellucci’s signifiers seem weighted down. They are tied to the reality of theatrical space, to the space of image making that is signified over and over again as each image comes into being. With a set that is heaved and scraped and bumped around, or a mirror that literally reflects the audience onto itself, this is theatre-making that knows it is being made. And it is creation in which the viewer knows she is involved. She watches herself imagining the image at the same time as she explores the resonance of the image itself. She watches herself watching (a scene that represents) abuse, aware that she has called the scene into being.

This is not to say that Castellucci’s theatrical worlds begin and end with the viewer. In fact, the visions he creates for Inferno, Purgatorio and Paradiso don’t seem to have a beginning or an end at all.

Inferno sees a mass of people take part in a cycle of life and death from which none can escape. Even after they have all died, and been reborn, and died again (slitting each other’s throats with an efficient flick of the wrist); even after an old man begs to be released, the mass of bodies rises again and backs away from the stage like the waves of life, as opposed to the individual living.

Purgatorio re-houses its characters in new bodies, committing them to a process that lasts beyond one lifetime, which is to say, beyond the experience of any body watching.

Paradiso writhes in a perpetual act of becoming. A figure, glimpsed in the obfuscating light of a dark inner chamber, stretches like a butterfly reaching out of its chrysalis. But the figure is always stretching - it never quite breaks free. 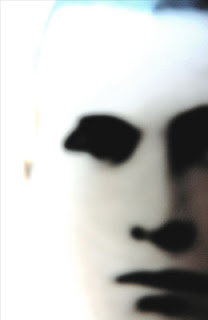 Performing this cyclical, continual field of creation, Castellucci’s trilogy enacts time and space on a colossal scale. Individual actions are only ever a metaphor or metonym for effects with much larger consequences. In Inferno, a basketball bounces to the sound of catastrophe – crashing, falling, scraping, like metal being compounded or bones being crushed. In Purgatorio giant jungle plants revolve slowly until they have engulfed a man’s struggle and a boy’s imagination. And in Paradiso an endless black horizon is contained – impossibly – inside an endless white one. Operating in this cosmic space and time, it is no wonder that the trilogy feels terrifyingly full when it is realised in the mind of a finite individual – a member of the audience.

Push and pull. Creation and destruction. Experience and awe. The cosmic scale and obscure symbolic weight of Inferno, Purgatorio and Paradiso amounts to a slow, metamorphic force that drives and exceeds each component part, a force that is compelled by a shifting power play between the performers - who signal the production of their performance – and the viewers – who acknowledge the production of their view. The enigma at the heart of this work is that, despite its fantastical image-making, despite its endless space and time, despite its awareness of the making of theatre and its collusion with the audience to bring the image to life, the trilogy returns to a theme of visual obscurity. The mysterious white horse in Inferno is part obscured by a swinging black circle, like an anti-sun. The cycle of violence and impotent redemption in Purgatorio is slowly veiled by a spinning circle of black paint. The twisting figure at the heart of Paradiso lives in such darkness that he could be a trick of the eye.

Paradiso is, then, (only) as heavenly as your imagination, Purgatorio (only) as (ir)reconciled, Inferno (only) as hellish. Seeing these images is not to know them, but watching them is to make them exist. Like forgotten spirits, they spin in their eternal worlds until they are called back to life by the strength of a viewer’s belief.

It is tempting to read the recurring obfuscation as an act of violence from the performer, directed back to the audience in order to protect the integrity of the theatrical whole: it will never be owned or contained by a single point of view. But in fact this obfuscation acts like a kind of pathway. These gaps in vision are stepping stones for the audience’s imagination; they let us know that the grand scale of this trilogy requires us to step inside, to acknowledge our collusion, to understand the imposition of a human-centric viewpoint on the chaos of the world. And this viewpoint is the source of the violence in the relationship between performer and performed-to. By creating one image we destroy another; Castellucci does not let us forget this awful responsibility. In Inferno, red flames lick the animal curves of a grand piano and make the strings buckle and twang. It is a beautiful and compelling sight. The piano, of course, will never be played again.