That Night Follows Day by Victoria and Tim Etchells

A: I was wondering if anyone was going to come and sit next to me.

A: No…I was not trying to sell a seat? [ALL LAUGH]

H: Good how are you? [SOUND OF CHILDREN PLAYING/SCREAMING]

A: I’ve had a busy day. I’ve been cycling like a maniac.

A: Cycling…yeah…for about three hours…

U: Fantastic! For exercise or to get around?

A: No, I do some work that I need to cycle for.

U: And have you been to other stuff at the Spill Festival?

A: Yeah…I went to Inferno.

A: How was that for you?

U: Errrr…I liked it a lot, and I was jet lagged but the next morning I did wake up and want more from it in terms of the way it was [SOUND OF CHILDREN PLAYING/SCREAMING] we were jet lagged and the pace…I actually loved the pace…it was very, sort of, mesmerising.

U: And then we went to see the installation and we are going to see Purgatorio tomorrow, so it would be good to look at them as a trilogy.

Where, why were you jet lagged – where had you come from?

A: Oh my god! You’ve come all the way from Australia…for the festival specifically?

U: We’re on holiday but yes, for the first week of Spill…then we’re going to Spain.

U: Yes…so we are seeing lots of shows. [SOUND OF CHILDREN PLAYING/SCREAMING]

So what do you think this is going to be like?

U: I have no idea…I love Tim Etchells and I love Victoria so…it’s ummm…we’ll see….

U: It’s actually been in Melbourne

A: Oh okay…you didn’t catch it?

U: No I didn’t get to see it…so…so are you an arts…worker…do you work in the arts?

U: Is your cycling for a performance?

A: Err no…its actually for a job, but I’ve been desperately trying - not desperately - I’ve been trying to craft it into a performance for a while. I cycle around so much and I always get very distracted from the actual thing that I have to do.

U: Are you a courier?

A: No I’m not a courier…this is what everyone thinks - that I’m a courier. I’m actually a ‘database collector’ and so I get a list of addresses and I have to go to the addresses and have to basically write down the name of the company that is there…but I get very distracted…in the city. [SOUND OF CHILDREN PLAYING/SCREAMING]

A: Yeah…it’s a strange job. So I’d like to make it a performance but I don’t quite know how that’s going to pan out…but it’s definitely in my mind. [SOUND OF CHILDREN PLAYING/SCREAMING]

A: Someone did say it had sold out but I don’t…I don’t think it has.

U: I guess this is a big space…but it’s not that full… [SOUND OF CHILDREN PLAYING/SCREAMING]

H: I don’t know how people…how they do it…for two nights…we don’t do that. A two-night run seems to be very standard in contemporary performance here, in the UK, and we don’t, we don’t do that.

A: Oh okay…I think its something to do with the fact that its part of the festival…and it’s a way of creating a movement through the festival?

H: But it seems to be…with places outside of the festival context…they seem to do that with live art though…

H: We very rarely do this…in the week…

Well you understand…if it’s in a festival, in a large venue like this that seats, what, seven, eight hundred…

H: Then you understand [SOUND OF CHILDREN PLAYING/SCREAMING] when you go and see two nights of another show…and you think about how many people they turned away…

A: What…they turned away people tonight?

H: No, no…we went to see Mem Morrison’s show and you know that was two nights with a capacity of ninety and some people couldn’t get in because it was sold out.

H: Maybe that’s the first run and then err…it gets picked up by a bigger venue, with more money, who can…err

A: I think that show was also specific to that space, to a certain extent?

A: It seems to be going quiet now…. 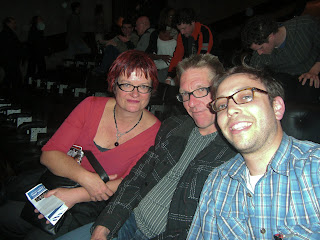