You tell us that we are children by Theron Schmidt 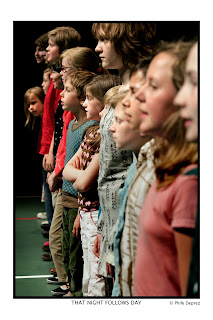 by Victoria and Tim Etchells

They are 16 performers whose ages range between 8 and 14. They mostly speak in unison, but occasionally in small subgroups, or individually into a microphone. They speak in Dutch, and their words in English are projected onto a blackboard over their heads as they speak. For the most part, the words they say are formed into sentences that have the structure ‘You [something] us’, as in ‘You dress us’ or ‘You feed us’ or ‘You tell us when to sit and when to stand’.

This is the scenario. It’s one in which the possibilities for the precarious, funny, obvious, and unexpected are all bubbling at the surface from the beginning. And the words that are to be spoken have been prepared long before we encounter them. They have been prepared by an adult, Tim Etchells, an expert on theatre, a writer. And systematically, exhaustively, this range of possibility, present from the beginning, is played out. Nothing happens to change the structure of the event: the simple fact of young performers speaking these kinds of sentences written by someone who knows his craft. Nothing happens which is not an exploration of what is apparent from the outset. But as the structure explores itself, I find that my own thoughts about what I am watching change significantly, that the categories that I think I would use to describe it start to break down and become inoperable.

It begins with a tone of accusation. The children speak in unison, reflecting the totality of the extent to which young people’s lives are out of their control. But it’s a totality which overreaches itself. As the list of information that is required of them goes on, it becomes absurdly impossible: the knowledge of right and wrong, the delicacies of every social situation, the history of the world and all of scientific discovery. How do they ever learn all this? How do any of us ever learn all this? Just when I think that this is an incredibly adult thing of which to be aware, the text adopts this adult perspective, with the speakers describing the things that ‘we’ think about ‘them’, our backwards-looking thoughts that have nothing to do with the reality of childhood.

So the text keeps shifting, always one step ahead of me, anticipating any question I think of about what I am watching. I reflect on the challenge of the performance task, the memorisation required – and the text becomes exaggeratedly virtuosic, spilling off into elaborately long constructions and bravado displays of wordplay. I think about the taboos about what children should and shouldn’t think – and the text becomes peppered with obscenities, with bigotries, the petty prejudices and hypocritical judgements of the ‘adult’ world. I think about the theatricality of the situation – and the performers say, ‘You give us words to memorise. You make us stand in lines. You tell us that an actor is only a parrot saying words he cannot understand.’

The obvious thing to say about this piece is that it is a piece about children and the power of adulthood – indeed, the newspaper extract quoted in the festival publicity calls this ‘perhaps the finest show about parenthood and childhood ever produced in Europe’. However, something more subtle and contradictory than this is happening. The piece has childhood as its central theme, but I cannot shake the feeling that somehow the performers have stopped being children – stopped being only children, anyway. Because of being on stage, these children are not really here; or they are not-here at the same time as they are here. Any of them could just as easily be a different child from another school – in fact, they were a different group two years ago when the work was first performed by a group of now-too-old children. And what they are constantly presenting and re-presenting is the idea of what is happening, the idea of a child speaking, represented by a child speaking. The child is both there and is also only the idea of a child being there.

Watching them I think: this is not just about the politics of childhood but about the politics of theatre. I think: something equalising happens to everything that appears on a stage. It’s a peculiar kind of equality, which works by doubling everything so that it is no stronger or weaker than its opposite. No difference, other than the perception of difference, between being and doing. Between reality and illusion. Between human and non-human. Between living and non-living. Between present and absent. Between dancing and walking. Between showing and telling. Between playing and screaming. Between violence and jest. Between mask and face. Between idea and image.

Watching them I think: inside this event, there is no longer any such thing as childhood. There is only the distinction called childhood, the distinction between child and adult. And this distinction – how it is formed and when and why – is a political one, one in which there is much at stake. It is also this distinction which is thoroughly obliterated by this particular theatrical event, precisely through its continuous, unrelenting articulation of ‘you’ and ‘us’. Through the line they keep forming and re-forming at the front of the stage, the line behind which everything is overshadowed by the idea of itself. Through the exhaustion of the structure. Through the way the structure exhausts itself. Watching them I think: what defines childhood, the only thing that defines childhood, is that some group tells some other group that they are children.

It is only in the curtain call, when the performers stand before me looking goofy, pleased and excited for what they’ve done, that they start being children again, and I again feel the responsibility of being an adult. I applaud, encouragingly, in my way of saying ‘well done children’, and at the same time I feel all the condescension of the gesture. But I feel compelled to keep clapping supportively, enthusiastically, in a performance of earnest affection and care – because it’s what adults do.

Theron is a writer and performer. http://www.newworknetwork.org.uk/theron