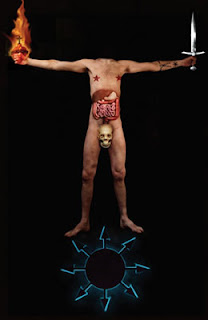 Visions of Excess is curated by Ron Athey and Lee Adams. The event, at Shunt Vaults, stages 12 hours of intense gestures, images and performances on the subject of death, eroticism and the forbidden.

Overspill: Visions of Excess was a collaborative writing event initiated by SPILL: Overspill writers Alex Eisenberg and Rachel Lois Clapham. The project involved both writers setting up a public writing station in Shunt Vaults, working over the course of the 12 hour event to produce live critical responses to the work experienced. This writing, which included dialogue from audience members and artists, was simultaneously projected into the space for the duration of the event.

The night was full of fun frolics, close encounters and highly charged performances, and lots of people participated in Overspill: Visions of Excess. An edited transcript of the evening’s activity will be available on Thursday.

Meanwhile, if you want to read more about Visions of Excess, Rachel Lois has written two ‘preludes’ to the event, musing on two different aspects of extreme or explicit live performance: the first prelude is on porosity, or the body without limits. The second is the contract between audience and performer in explicit performance.