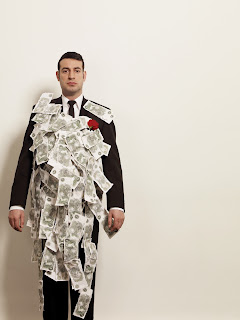 The grand surroundings of Shoreditch Town Hall are the backdrop for a night of weighty expectations in Mem Morrison’s Ringside (a SPILL Commission). In the vaulted hallway, I am transformed from an audience member into a wedding guest with a red carnation, an ivory programme that requests the pleasure of my company, and the invitation to mingle.

Look at the cornicing! The stucco! The paintwork!

Just like a real wedding, the guests exchange nervous grins, offer stilted conversation, and try to imagine our place in the unfolding events. When we are led into the magnificent hall itself, we are photographed in the roles of wedding characters – the bride, the groom, and also an awkward neice, a jealous sister – and seated at a large horseshoe table. The table means we all have a front row seat, but it also means the guests can watch each other. And we do, with the special public permission of people at a wedding, as opposed to the individualised formality of audience members at the theatre.

What do you do?

The performance is hinged on this relationship between public and private, spinning round the convergence of public duty and private desire. Guests are given headphones, through which we hear Morrison’s interpretation of events as a12 year old boy attending his first family wedding. It’s a heady affair – a Turkish-Cypriot reception rich with cultural tradition. And tradition, here, is another word for community, another word for obligation, another word for knowing what will happen next. Ringside is both a remembered wedding and an imagined one – it is all the weddings Morrison has been to, and also their culmination in the wedding he is yet to have.

Morrison conjures up a wedding in this private stage, enclosed by the table and the expectations of his guests. He acts out a series of ritualised images and relationships – building the wedding cake, filming the reception, presenting himself to potential brides. Meanwhile, his thoughts are delivered, as if they are secrets, to each guest through the headphones. Broken ocassionally by the public soundscape of speeches and songs, this stream of confidences is what lets the guests know what is going on. But it is also what undercuts the innevitability of the wedding tradition, a message of passionate confusion from a reluctant protagonist.

It’s your turn next.

Morrison’s past and future ceremonies unfold with the half-remembered, half-recognsied innevitability of a culture you’re born into. There is a future waiting for Mem and his yet-to-be-chosen bride. It’s a future all of us guests are building, complicit in the routines and regulations of this imagined scene. Yet, party to both his family’s expectations and Morrison’s private fears, we fall in and out of the compelling rhythm of tradition, just as Morrison falls in and out of the rhythms of Turkish dance. By the end of the performance Morrison is trussed in a red ribbon pinned with money. It’s his turn next, he says, speaking in public (without the headphones) on his private stage. Has Morrison accepted his fate – to become a family man, a respectable man, to find a sweet smelling woman who understands the cut of his suit? Or has his fate caught up with him, winding ever tighter in the opulent binds of expensive fabric and other people’s public concern?