On being with her by Theron Schmidt 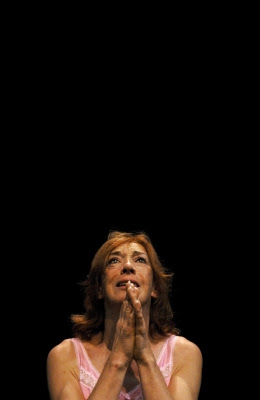 This is Vanessa’s story, of how she always identified herself as a woman and eventually became the first transsexual in Belgium. But what’s surprising in Vanessa’s story is how familiar it all seems. Her story rests on a series of scenes that feel commonplace, almost shorthand, like little photo-postcard moments. The boy who is not like the other boys. The mother who worries about whether she wished too hard for a girl. The father who wants his boy to play football. The goodbye to the first lover at a train station, crowded with homeward bound soldiers. The angelic Moroccan nurse who comforts her after the surgery.

Even at its most moving, there’s something almost self-consciously emblematic about her story. The scene where she tells her mother that no, she’s not acting anymore – she’s dancing, and the awful pathos of her mother’s realisation that ‘dancing’ is a euphemism. The scene of reconciliation, when her supposedly uncompassionate father asks her to come close, for he ‘has another daughter now.’ These are moving, heartfelt moments, moments you would want in a good screenplay, or a season finale. They are truthful moments of vulnerability and compassion – but, in a story about a life that is so unconventional, it is striking how much they are conventionally so.

The whole piece has this easy, light-hearted attitude toward theatre. In contrast with the rest of the festival, this is not an occasion for provocation or experimentation. It’s a tidy story that would disturb no one, that is told conversationally but that is also obviously a carefully prepared script, one that is filled with pathos and bathos and ends happily with marriage.

Without wanting to assume too much from her story, perhaps her complicated life has left her particularly attracted to these uncomplicated moments. What others might take for granted – the obvious and familiar of the everyday – may not have been common, easy, or obvious to her. Perhaps this story is an expression of a desire for this clarity, for an unproblematic match between how things seem and how they are. Or maybe she has been aware of the singularity of her life all along, has lived it as a biopic in the making, selecting scenes as she lives through them. I don’t know. I don’t know what it’s been like to be her, despite having heard her life story. How could I?

But the story she tells is only part of the experience. It’s one reason I’m here, in order to hear her story, but I’ve also come in order to see her. She’s come to tell her story, but she’s also come to show. To appear before us. To appear before us in this body that she has made for herself, and to speak in the voice that she has claimed as her own against significant obstacles. And it’s a remarkable body, with something liquid and changeable about it. Tears always just behind her eyes, and a softness in the back of her throat. She leans and sways across the stage, holding each of us in her eyes, and being held herself in ours. Look mummy, I’m dancing.

When Vanessa impersonates her mother, it is clear that something of her mother lives inside her, and when she impersonates her father, it is also clear that her body has both woman and man and inside it. Being in my body, being together with other bodies, as we watch her, I have a sense of the collective body. Not just as an aggregate of us to which we each contribute our individuality, but in the sense of a collection, a gathering of parts and pieces and histories that each of us claim but that none of us really own. How my body is both mine, but also the vessel through which my culture acts upon me. How the way that each of us holds our body is partly determined by the collective hold over us, and the way that the common’s hold over us is through our bodies, through our bodies on display, through the way we must appear to each other. The theatre: the seeing place, the space of appearance.

And then the part of the experience that consists of her telling a story comes to an end, and what’s left is just us being in the room together. The proximity of our bodies, the crossing of our gazes, our being in common. We are clapping for each other now. And this is a moment of pure acknowledgement, a moment of affirmation which goes both ways, and I find myself to have become liquid too, spilling over with emotion. Engaged in this nonsense gesture, clapping clumsy hands against each other, as a pretence to prolong the moment, to permit this last look at each other before we return, again, to the conventions and dramas of everyday life.

Theron is a writer and performer. http://www.newworknetwork.org.uk/theron