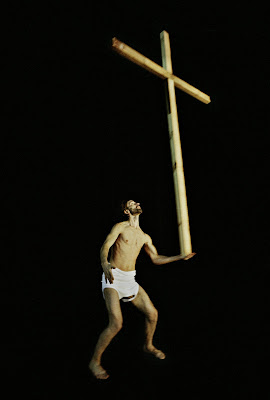 In a world where everything is tolerated, how do you know what it means? If we agree that taste is relative, then what’s the point discussing taste at all? If consumerism doesn’t have a moral or ethical cloak – you don’t need to consume for any other reason – then why will having things make you happy?

If there is no moral compass, in other words, the drive for personal fulfilment has no context, and no prize.

Jan Fabre’s production really does begin with a round of competitive masturbation, in which two men and two women try to orgasm to the vicious encouragement of a team of military coaches. It is the woman who loses, lying shivering and unfulfilled at the front of the stage, who introduces the rest of the show - she is ‘very excited’ [to welcome us to the show] she tells us, although she is crying with the frustration of not being able to come. Unable to amuse herself like the other contestants, this loser sets the scene for an indictment of contemporary culture, consumerism and the liberals who pretend they don’t take part.

This complacency of desire in Fabre’s play is neither a solution to unhappiness, nor a useful tonic for it. Early on, Jesus makes an entrance. Bearing his cross on the way to dying for man’s sins, he is immediately spotted and styled by a camp fashion director, and his cross is removed. Instead of relieving Jesus of his burden, however, this propels him to spend the rest of the play wandering on and off stage, balancing an imaginary cross like a deluded circus performer. Later, couples wander on stage and start to pick out parts of the set to buy for their living rooms, but they can’t get their fix from consumerism alone: they also need a good snorting of cocaine to help them on their way. And what of the men who are fellated by silent, stiletto-wearing slaves as they discuss their ‘trophies’ from human hunts? Nodding sagely at each other’s racist jokes, they slide imperceptibly into barking madness – one of them sticks his rifle up his arse and yelps like a rabid dog.