J: Should be good this, I think…

A: You looking forward to it?

A: Maybe it’s because we are quite close to the front?

J: I always think being in the front would be a better view than the back, right?

A: It depends, you know…

J: Look, I kind of don’t mind if I don’t see the whole stage, because you actually get to see the action closer up. [CRACKLE] Yes… but I think I see the point you make there, [CRACKLE] I guess it’s because I watch too much film right? I bought all three of these, so I don’t know what the rest are going to be like. [CRACKLE] I hope that noise doesn’t go the whole way through the show.

A: So have you come far tonight?

A: Oh you live in the city.

J: But to be honest, this is so remote from where I live….[CRACKLE] [CRACKLE]

J: This is like on the other side of where I live, I work not too far from here…its okay I’m not a banker [CRACKLE] or anything like that…

A: So what do you think its going to be like?

J: I actually have no expectations. I find this almost impressive, even though it’s quite unnerving. [CRACKLE] Look they claim it’s eighteen plus right and that it has disturbing material, so how bad can it be?

A: What would be disturbing?

A: What would be disturbing for you? [CRACKLE]

J: You know what Giulio Andretti once said, – “We’re all average citizens”. Nobody’s really that big a sinner and nobody’s that big a saint…you know…I don’t know.

A: We’re all a bit similar?

J: You guys all know each other?

T: This is Rajni…

J: Are you like affiliated with the action; you seem to know a lot of people here?

A: A little bit, yeah…So you’ve come from, when you say the other side of the city?

A: Oh, I though you meant the City of London, okay…the other side of London.

J: In fact, I think of this being one of the better venues in London, because they have more interesting stuff and it takes me an hour to get here and an hour to get home. That way, if I come here for an event I try and bunch them together, I go to two events…

A: So are you seeing two things today?

J: No, I wanted to get one for Paradiso afterwards but it’s sold out so…but usually I go to like a play and like a film. They show good films here.

Do you know Romeo Castellucci’s work or is this a new encounter?

J: This is, this is a new encounter. Usually I’ll read something and if it sounds interesting enough in the first two sentences, I’ll come, with no expectations of what’s going to happen at all. [CRACKLE] And usually I find with classical performances, if it’s a piece I don’t know I tend to enjoy it more. [CRACKLE]

A: Okay, so something new…

J: Exactly, and I come with no expectations at all.

J: I know it’s kind of wrong that it’s not very exciting…

It looks like it’s designed on an Apple computer.

A: Yeah, it’s got that sort of white feeling right now…

J: Right, and almost like Helvetica letters, [CRACKLE]…not quite actually.

A: But that type of font system, I think.

J: I’m sure that this was designed on an Apple computer.

A: I’m sure there was an Apple computer involved at some point, I can’t be 100% sure but I wouldn’t be surprised.

J: So what do you do for the production – you aren’t the guy are you?

A: No, it’s called Spill, actually.

A: We’re actually doing a writing programme, responding to the work in the festival, through writing.

A: Yeah…it’s more than a review. Or its just different to what a review might be.

Its nice and spacious here, isn’t it?

A: No I didn’t mean that [LAUGH]…I’m just saying there’s a lot of legroom. [CRACKLE]

J: In terms of comfortability, this is one of the better places.

A: Does that make a difference to you?

J: When I was thinner, like a few years ago. I prefer like, a more spacious venue.

A: What’s your name?

J: Cos like, [CRACKLE] the other venue, what’s it called, the National Theatre, its pretty good as well.

A: Yeah it’s a big auditorium, but it doesn’t have this sort of legroom.

J: And most of the other West End theatres aren’t great at all in terms of legroom. But they have a bit more atmosphere - the theatres themselves, that they’re older.

A: Nice gold and stuff.

J: When you go and see a [CRACKLE] period piece, it really feels like a period piece. And there’s that other one which is by the Trocadero, and the stage looks modern but the rest of it is fairly classic looking. I go to a lot of stuff, you know when I have the time I go.

J: No, no look, I’m not a millionaire or anything like that, I do have to work. [LAUGH]

J: I actually started a new job, I used to be a banker, in case you were wondering. I didn’t cause the problems though, I was always the guy who was trying to fix them.

J: But it didn’t work…so they laid me off. I used to live in New York City.

A: Are you American?

A: I thought I was picking up a South African accent.

J: Yeah I have a bit of a mix. I have a mélange of accents. [CRACKLE] [CRACKLE] Yeah, so I work in marketing, like, dare I say a hedge fund. You know they pay so…not great, but they pay enough to live on.

A: Are you with anyone tonight? [CRACKLE]

J: Just me. You know it’s much easier to find somebody to go to an event with if you don’t need anybody to go with. Right?

A: [CRACKLE] No pressure…

A: You just have your own time to process it?

J: Exactly, you see what the problem is that, most of the friends I have here in London, most of them I know through finance, I feel a bit resentful, because no one tried to help me out when I was unemployed [CRACKLE]. [CRACKLE]

J: Well it’s you know, like when I was looking for a job. I don’t mind if somebody can’t help you, but a friend should be [CRACKLE] meaning that they should take the five seconds it takes to look [CRACKLE] and ask around and make somewhat of an effort as opposed to fuck all.

A: How long were you unemployed for? [CRACKLE]

A: What did you do in that time? Were you looking for jobs?

J: I was depressed. I gained some weight.

J: Well you know the problem is that I didn’t have a green card…the only country more hostile to foreigners that speak English than England is America. You know in Britain it’s getting much harder now. They’ve toughened up immigration [CRACKLE], they have blamed all immigrants on [CRACKLE]…I can’t blame the country because of the recession, people out of work and all of that…

A: So did you come here in order to get a job?

J: I am here on one of those programmes that they blame on all of the immigrants getting here.

A: And how’s that working out for you?

A: Is this the first time you have lived in London?

J: Well I went to Cambridge a long time ago…

J: It’s a great city, I like London, though its very hard to get around. I find it takes a very long time to get from east to west. [CRACKLE] Yeah, you know if they had an express train that ran from east to west and from north to south, that would help a lot actually.

A: Yeah, I think they are doing this ‘Cross Rail’ thing.

A: I know, I know. In New York they are not [CRACKLE] so expensive.

J: Saying that, I do think that the cab drivers here do enjoy a better quality of life.

A: It’s a good job, you earn a good wage from being a cabbie.

J: But in New York, its like…that’s the job I would not want to do…the only job harder than being a cab driver in New York city is being a bus driver in London. Especially in the suburban areas…

J: …Where there’s this much room and you’ve got to squeeze…everyday they scratch the fucking car and some fucking bullshit you know. And nobody’s reasonable anymore….and, you know I’m also one of those people who gets upset at the [CRACKLE]…

J: I’m also one of those people who gets upset at certain things…I’m not blaming anybody [CRACKLE]….it’s just…I think we’re about to start.

A: What makes you think that? [CRACKLE]

J: Maybe when they say it’s disturbing they are going to have this sound running the whole way though the performance?

A: Would that be disturbing?

A: Things seems to have gone a bit more quiet now… 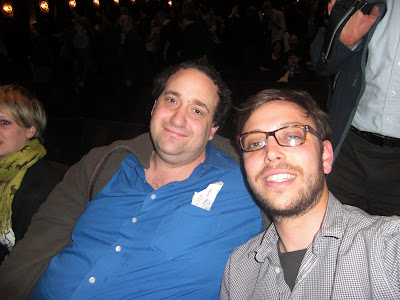