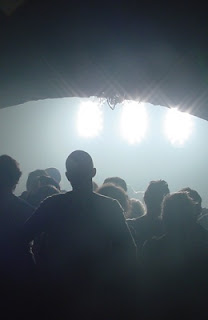 Visions of Excess was curated by Ron Athey and Lee Adams. The event, at Shunt Vaults, stages 12 hours of intense gestures, images and performances on the subject of death, eroticism and the forbidden. There are two preludes to the event: Prelude #1 Porosity and Prelude #2: The performance contract.

Overspill: Visions of Excess was a collaborative writing event initiated by SPILL: Overspill writers Alex Eisenberg and Rachel Lois Clapham. The project involved both writers setting up a public writing station in Shunt Vaults, working over the course of the 12 hour event to produce live critical responses to the work experienced. This writing, which included dialogue from audience members and artists, was simultaneously projected into the space for the duration of the event. The 12 hours was full of fun frolics, close encounters and highly charged moments, and lots of people participated in our live writing performance. Below is an edited transcript of what happened between 9pm and midnight.

Alex - Things started about half an hour ago (officially). Before that, there was this moment when the fluorescent lights went off, when you could no longer see where the cavernous vault ceiling began or ended, when the space suddenly seemed to become cleaner OR that you could no longer see the dirt and blemishes on the floor. Perhaps that was the moment that things begun?

R- I came in the back way, I was with a group of friends and just swooshed in by mistake. I did not even really know what was going on.

Rachel Lois- Why are you here then?

R - I just heard there was this crazy 12 hour thing going on and that Franko B was in it. Now I’m here underground with all these people. What if we all die in here, and no-one notices for weeks? On the other hand, there could be a nuclear explosion and the only people who survive will be us in here. Then we will be responsible for creating a new race.

Rachel Lois- That would be a very distinct breed of people.

R –Yes, all live artists - art would be life. People would come to Shunt just to do regular office work, to be radical and try and get away from the art outside. ….I think some of my issues are going to be resolved here tonight. I’ll come out with piss, shit and vomit all over me but pure and clean inside…

Rachel Lois - Samantha Sweeting’s La Nourrice (Come drink from me my darling) is a one to one performance inviting audience members to suckle. She will be open for suckling in two minutes. I just visited but she had no milk….

You might be interested to know that men can lactate. Samantha is sure of this. Has she known of any men that do it? I forgot to ask. But the salient point is that our bodies can be fooled, tricked into thinking they are pregnant. It takes time. Effort. Commitment. Not a little bit of discomfort too. Who is being tricked when the body produces milk with no baby ensuing? Which ‘I’ is tricking who? Not mind over matter, not a matter of deceit per se. Who lies when the body lies to itself? I am struck how Samantha’s space smells like a farm, it’s the oil on the fleece- the sheep’s natural secretions. Her performance space conjures images of health, hay- rolling in it. Is what Samantha is doing healthy in the same way? She is giving life, she looks rosy-cheeked….but I think something else is going on down at the farm.

What is at stake breastfeeding a stranger? In John Steinbeck’s ‘Grapes of Wrath’ the final chapter of the family’s desperate exodus across the great American plains ends in a barnyard. The daughter of the farmer gives life- literally- to a starving family. She lets members of the family suck her dead baby’s milk from her breast. Milk overflowing, the body not aware of its own baby’s demise. The hungry family take over, eager to suckle. Is Samantha’s an act of charity? What is being given and what taken? Her body’s excess is being embroiled in a transaction of desire, fantasy. Milk takes on new meaning here, becomes exorbitant, something unreasonable, over and above its assumed value.

Alex - Along the ‘long corridor’ and making your way past the small crowds watching Dominic Johnson or people swinging on a large aluminium swing as piano music plays, I find a moment of quiet with Julie Tolentino, who has been slow dancing blindfolded with strangers and since 9am this morning. She will do this until 9am tomorrow morning. Partially obscured Julie is standing, alone (now). She is standing on grass and she is wearing a black dress, a black shawl and a black blindfold. She is standing inside a glass walled box. I see her standing, alone (now), and I want to join her, I want to have a dance OR to be closer to her (now). Stepping inside the box you wonder how to begin? A self-conscious moment, reminding you of your ‘first’ slow dance creeps in but I go willingly and say ‘hello’. And then, without trying too hard - we are dancing – together. The music is hard to make out – there is the sound of crickets, as if you are, despite the confines of the box, in some natural landscape. I ask Julie if I can take off my socks so as to feel the grass on my feet. There is a break in the dancing as I sit on the stool, take my socks off and re-enter the box ready to resume but this time – a bit more natural?

The slowness of the dance gives you some time. This is both time ‘out’, (almost) out of the event but also time ‘with’ – time with Julie, time with yourself…as I begin to notice my reflection, multiplied, in the one way mirrors that surround us as we dance together. I am drawn further into this act through my multiple reflections, unable to see out, to see if anyone is looking, I find myself undisturbed, focused.

Conversation between Suckler A in Samantha Sweeting’s one to one performance and Rachel Lois.

Rachel Lois- So how was the suckling?

Suckler A - Weird. But good (wiping his mouth). She is a nice person, gentle, makes you feel comfortable.

Rachel Lois- Was desire was a part of your experience?

Suckler A – yes. I think so. You do suck from the nipple, so there is an aspect of desire. Are you going to suckle?

Rachel Lois- I’m really not sure. I know Samantha, we have chatted online. But now I have this problem of whether I suckle, then introduce myself. Or do the introductions first-then go ahead and suckle. There does not seem to be any protocol for these situations. But it does not seem polite to go ahead and suckle without introducing myself first. Somehow not cricket?

Suckler A- I know what you mean

Rachel Lois - Back now. I just refused to be in a live photoshoot with a large bear with his fuzzy genitals hanging out. He seemed hurt, the bear. I promised to come back later. Although I may not. Have to work up to these things. The guy before me in the photoshoot seemed to be having fun, cavorting with ‘Mouse’ in her cartoon, fetish-doll type get-up minus pants (which were round her ankles). Jon and Lee choreograph these photo-shoots, these casting couch moments, at fetish clubs and sex mania events normally. The camera acts as stimulus in these situations - attendees at fetish clubs have dressed up and are only too willing to have their frolicking caught on camera, their dress-up captured for prosperity. Me, not so much. I’m thinking about the deferred audience for these naughty but nice pictures. Not ones for the family album - not my family album anyway. Although I do get a kick out of which families, whether knowingly or not, would open up albums to find these pictures - your loved one’s face in a strange doll-lady’s arse, her hands on your crotch, both of you beaming with a fuzzy bear and his genitals stood behind grinning. Who knows what’s going on inside that bear suit.....

And we stand there watching.

I imagine these photos being sent to the front line of a war to cheer up troops, boost morale. A flagging one: that’s the bunting- reminiscent of a wartime ‘make do and mend’ ethos. Although what kind of troops these would be- I’m not sure. A bizarre barracks scenario pops into my mind. Army commandos with Bruce Labruce’s photographs of the bloodied, naked, hard man licking his gun stuck above their bunk beds. What kind of war is being fought here? One in which the extreme, extreme bodies, desires and footage, makes a difference, where wrongness is explored and pledged allegiance to - with big guns. Not for the faint hearted. The end of the line reached and breached under the national flag.

Conversation between audience member A (a theatre critic) and Rachel Lois.

A - Journalistic curiosity. I’m trying to push myself because I’m quite squeamish. It’s good for me to see things like this.

Rachel Lois- You are pushing yourself to the edge?

Rachel Lois- How are you making it through the night?

A- I am self medicating with gin. I hope that will make the blood stuff easier to handle. Either that or I will pass out from too much drink and experience the work ‘in absentia’. It’s the blood that I can’t handle, the mix of fake blood and real in performances next to each other. Bruce LaBruce simulating gore, bloodspatter on naked bodies. Then Dominic Johnson right next door, piercing his own flesh. Something about the artificiality that is more disturbing than the real thing. 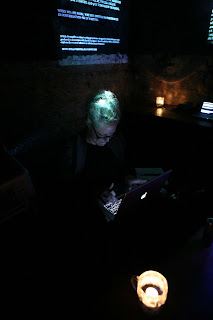 Click here to read the text from the next 6 hours of Overspill: Visions of Excess.