Telling the telling of a tale by Mary Paterson 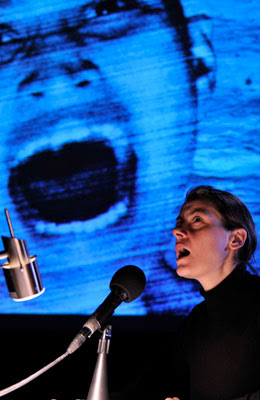 The set for Void Story, Forced Entertainment’s latest show, is made up of two small desks, one large desk and four chairs. There are four lamps – one to illuminate the desk space of each actor – four scripts, and four microphones. On the long desk, there are two Apple Mac laptops and a mixing desk with a complex system of dials and wires. At the back of the stage is a screen, onto which are projected a series of static, collaged images in black and white that correspond to the story. The story is being told by the four actors at the utilitarian desks, reading their scripts, and speaking into their microphones.

In other words, Void Story looks like the making of a radio play. The actors perform for an aural, and not a visual, effect – the mixing deck provides background noise and other distortions, and they also use more old fashioned techniques like rustling a crisp packet to make a phone line crack up. The images onscreen look like black and white photos that have been cut and pasted, then photocopied together. The result is a collection of flat, studio poses (woman and man standing, woman and man looking surprised, woman and man lying on floor) inside a series of banal, disjointed landscapes (tower next to tree next to lamppost) which make no attempt at perspective or verisimilitude. Rather than illustrate the story being told – a twisting tale of two protagonists caught in a hostile, post-apocalyptic world – these collages approximate elements of it. Just like listening to a play on the radio, then, the real pictures are conjured in the audience’s minds.

But the presence of these almost-illustrations, as well as the physical presence of the actors and equipment onstage, means that the viewer cannot simply drift into an imagined landscape of her own. Seeing the constituent parts means you can never quite suspend your disbelief and surrender to the fictional whole. That child you hear is actually the voice of a grown woman, distorted through an orange microphone and a glowing computer; that robot is the voice of a middle aged man. Both product and production, Void Story dissects the body of the play like a living autopsy. It’s not just the inanimate objects that make up the ‘equipment’ in this show; I should also have listed the voices of two women and two men, not anchored to their bodies but practically deployed wherever they come in useful.

In fact, voices, images, plot devices and other pieces of equipment are used and re-used throughout the play, as if they are interchangeable tools fit for any purpose. Photographs that show a woman and man scream, for example, are used later in the play to represent them dance. In the context of theatre, of course, the word for this is 'prop': an incidental, almost abritrary object that carries no value of its own.  Void Story uses props as props –as tools to point towards an act of storytelling, rather than elements subsumed into a story.

And what of the story itself? The protagonists, Kim and Jackson, are chased, attacked, victimised, cheated and conned by people acting in inexplicable ways. They are pushed from event to event, journeying to unknown places and meeting a cast of strangers. In other words, it is every story ever told, every fairytale ever uttered, every dream you’ve ever had. It is Everyman and Everywoman, in Everywhere, affected by everything. As such, the story is both the bare skeletons of a tale and the full body of an epic. On one hand it is a series of unlikely things happening to two people you don’t know; but on the other it is a universal story of people dealing with adversity, of humanity in the face of fear. There is so much left unsaid that the story never reaches a narrative arc. Instead, it begins with a bang and ends only when the protagonists fail to react to the world around them. And this ending, too, is unresolved – like a computer game, the characters could just have faded away to start once again at the beginning.

In Void Story, then, even the plot is a prop – one of a collection of instruments that can sustain the whole. But if everything is a tool, what can the greater whole be?  Instead of a whole there is a hole, a void, at the the heart of this story. What is left is the process of story-telling and story-watching itself. Beneath the thick and delicious syrup of fiction, lies an equally warm and spicy blend – the desire for fiction to take place. It is made in the affectionate looks between actors as they wait for each other’s cues. It is the cocked heads of the audience as they follow the actor’s leads. It is also the naïve collages that bear so obviously the mark of a human hand. Unlike pictures made in Photoshop, for example, the smudges and imperfections of these images trace their own means of production. In the same way, by exposing the aural ‘tricks’ of a radio play, Void Story does not simply tell a tale, but also tells the telling of the tale.

Sitting in the packed auditorium of Soho Theatre, it felt like the play was a balloon that the audience and the actors were bouncing in the air between them. Perhaps it wouldn’t matter if the balloon fell to the ground – we can always pick it up and start again. But first, let’s enjoy the game of keeping it afloat, of making the play together.