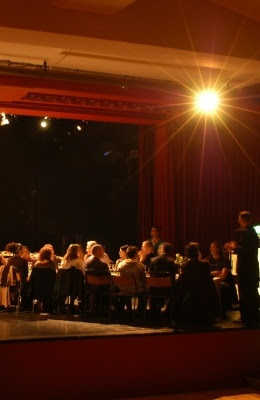 Martin Jones, an archaeologist of food, has made a ‘thinking map’ of feasts – not a model, exactly, but a layout for the social significance of sharing food. In the centre is the hearth, surrounded by a group of people that eats together, tells stories and follows an etiquette: this constitutes culture. Further afield is a transitional zone, a zone of dancing and drugs, where culture is put to the test. And further still is everything else – the chaos of unmediated life: this is nature. Feasting, then, is at the centre of culture, which is to say the centre of ways of coming to terms with the world. As well as the literal points of reference within the SPILL Festival – the SPILL Feasts, for example, and the feast at the end of Rajni Shah’s ‘Dinner with America’ – feasting is an apt metaphor for work brought together in a festival at all. And the Salon on Monday 13th April, organised and hosted by SPILL Thinker in Residence Kira O’Reilly, was both a conversation about the relationships involved in food and eating, and a reflection of the community generated and sustained by SPILL.

At the Salon, Australian artist Boo Chapple discussed a work called ‘Hand to Mouth’, in which she and an army of volunteer production line workers cooked a meal for a high table of guests. Unlike a normal fine dining experience, the food was prepared to resemble some of the processes that went into making it: literally, the many hands that have touched the food before it arrives at your table. Later, the British artist John O’Shea talked about ‘The Meat Licence Proposal’, a project which aims to change UK law so that people who eat meat must ‘be equally comfortable with killing animals’. Under O’Shea’s proposed law, people would need a licence to be carnivorous, attained through slaughtering an animal. These projects show that feasting is no longer as simple as sitting round a hearth sharing the spoils of the day’s hunt. Food arrives on our tables via a host of invisible others – the others that grow it, transport it, kill it, preserve it, package it and sometimes prepare it. As anyone who has ever worked in a restaurant kitchen will know, there is a large gap between the pretty stories our plates can tell us and the grim reality of how our meals have arrived. Chapple and O’Shea both try to unearth part of this reality, to turn eating from an act of consumption, perhaps, to one of proper digestion.

Where does this kind of activity sit in Jones’ thinking map of the feast? Is this cultural awareness a way of testing culture, or is it one of the stories that we tell at the hearth to let us know who we are? Since beginning ‘The Meat Licence Project’ O’Shea has stopped eating meat. ‘But I’m not’, he says adamantly, ‘a vegetarian.’ While he literally fits the definition, he does not attribute the cultural associations to himself. Similarly, those of us at the Salon all nodded at the materialisation of mechanisms behind food produce in Chapple’s work – we ‘got’ the concept. But it must surely have been a more visceral experience for those doing the eating. Diners at ‘Hand to Mouth’ had to gnaw lamb as if from a human wrist, and to eat chocolate fingers off human ones. Perhaps these reflections on feasting tell a story by rupturing cultural norms - including the ‘norms’ of liberal self-awareness – which can only be reconciled through a process of re-telling, like suture through social exchange. In Chapple’s case, this is achieved through the event of eating itself. And in O’Shea’s, through that other essential part of the feast – dialogue; his project currently exists as a discussion site online: http://www.meatlicence.org.uk/.

If there is a ‘nature’ in this extended metaphor, it could be the landscape of British theatre. Both defining culture and testing it, SPILL is already having an effect on the way we see the world beyond. The question is, what kind of effect will this be?