P: Are you supposed to sit here?…no…

P: Are you sitting with him?

P: Oh okay…Sorry I thought you were with him.

A: Oh…I thought you were together!

So what do you reckon it's going to be like?

P: I don’t mind…well…I kind of like a bit of both…the text is often good so…they can get away with it.

A: So you’ve seen quite a lot of their work before have you?

P: I’ve been seeing them for a long time…yeah…yeah…

A: Got any favourites?

P: ‘Dirty Work’…that’s quite a long time ago. ‘Speak Bitterness’…that’s a while back umm…I like their earlier stuff better actually.

A: Okay…so you’ve been a long time follower and it's 25 years in the making.

P: But I mean…I saw some of that on video…yeah…’Dirty Work’ I saw live…yeah…I did a workshop thing…like a residency with them in ninety-nine…ten years ago now…which was good but…

If I could just ask you all just to scooch along just a tiny tiny bit…In front of all of you is a number on the back of the chairs in front of you…if you all look at a number and all sit behind one that would be perfect. Because then we can get 14 people to every row…cos we’re completely sold out. Thanks a lot!

A: That was funny! …It is quite squashed in here isn’t it?

P: I think they always have to do this…and they do this speech…

A: They’re used to it…she seemed quite practiced.

Oh right…we’re getting into seat 9 and 10 here.

A: It's amazing how much room there is when we all…

P: Yeah…you see everyone wants to give themselves a bit more personal space.

A: Well also these seats, you know they’re quite…

A: So have you been to anything else in Spill?

P: No I haven’t…I haven’t had a chance…I’m just going to see this and the other one tonight and that’s it…that’s all I’ve been able to…I would have liked to have seen some of the stuff last week but…

A: Oh you are seeing the show after?

A: So…are you involved in the arts at all?

P: Not really any more no…I look after my son now.

A: Lovely…that’s your full time work is it?!

P: I used to do a bit…just marketing stuff…but I have to look after him now.

A: But you didn’t want to bring him along tonight though?!

P: I don’t think I could handle it!

P: He’s normally in bed about seven, seven-thirty. It's how it is with that age.

A: It would be good to go to bed at seven-thirty…

P: I go to bed about nine-thirty…[LAUGH]

P: Well I have to because he gets up at half six…otherwise I…I like my sleep so…you know…

P: It's like…going to bed at eleven feels like a late night. Like, I watch a movie and I’m like…wooo ‘late night’. [LAUGH]

Gone are the days of drunken craziness!…Well I still do that occasionally but…you know…

A: Well I suppose you sort of succumb to the schedule of your child…
P: Yeah…they take over…

A: Yeah…It's interesting that…I’m not in that sort of schedule I’ll be honest with you!

P: It's funny…it does take over…I wasn’t before and now… you’re like…wow it's a very different thing!

A: I’ve been wondering what it's like to sit up there on those stools.

A: It seems to be going quiet now… 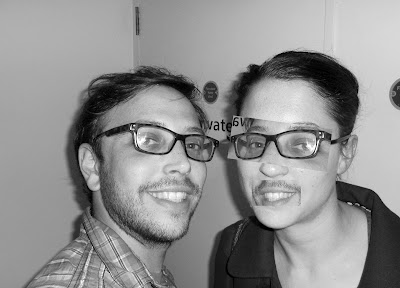 Below are links to the other conversations that I have had: