In the words of Robert Pacitti, in the introduction to the limited edition SPILL Tarot pack, ‘the tarot stands as viable a means of interpreting the world as any other – including science, philosophy and mathematics – and I defy any sceptic to prove otherwise.’ A Tarot pack is a set of 78 cards most often used, in English speaking countries at least, for the purposes of divination (in France and Italy it’s also used for playing games). The pack is made up of the Major and Minor Arcana, people and things that represent the elements of our world and the characters within it, and Tarot readings are carried out in relation to spiritual enlightenment, psychic communication, and the occult. But, as Robert Pacitti points out, a reading is as much an act of interpretation as one of prediction – the meaning of the cards reflects the reader’s frame of reference as well as her frame of mind. It’s this ability to crystallise thought that gives the cards their power.

In the case of the SPILL pack, the cards’ power is enhanced by the symbolic resonance of the images, and the way they have been produced. The Major Arcana – character types that include The Fool, The Hermit, The Moon, and everything in-between – are pictures of artists and other contemporary ‘mavericks’ from across the fields of art, academia, cultural activism and beyond. I have just cut the pack in three to reveal Robert Pacitti – Artistic Director of the Pacitti Company and creator, producer and curator of the SPILL Festival (‘Death’); Lois Kiedan – co-founder and director of the Live Art Development Agency (‘Justice’); and Empress Stah – trapeze artist, Neo Cabaret performer and producer (‘The Star’). The pictures were taken by the photographer Manuel Vason, who has devised a unique working method in which he collaborates with his subjects to capture performances made for the camera. As a result, the SPILL Tarot pack does not just help crystallise the thoughts of the person using it; it also goes some way to crystallise the processes of collaboration, challenge and knowledge-sharing inherent in the SPILL Festival itself.

Coming at the start of the pack, The Fool is the journeyman of the Tarot, an innocent and a visionary who may be drawn in any direction by the rest of the cards. As such, the Fool embodies the reader and all her potential. The SPILL Tarot Fool is a figure in mid-air, leaping with abandon against the greying landscape of modern agriculture. A stony, pit-holed path winds through fields of dried out crops; an energy pylon and other industrial buildings line the horizon. As s/he jumps, the androgynous figure of the Fool stretches out of her newspaper costume, and pulls her mouth tight between a grin and a grimace. Above, a small clear moon makes an early appearance before sunset. Behind, a dog looks warily at the strange traveller with her eyes covered and her feet bare.

It’s hard to tell if the Fool is jumping for joy or desperation. She exists in both day and night, in the freedom of outdoors and within the cultivation of industrial agriculture. Suspended in the air, suspended in time and suspended between places, this figure embodies the ‘unbridled primal energy’ of the Fool.

But the card is also a picture of Rajni Shah, whose performance piece Dinner with America, was programmed into the SPILL Festival; and it’s easy to see how, like her performance, this image draws on the potency of symbols that slip in and out of recognition. But the energy of this suspended image – with Shah’s head thrown back and her arms stretching away from her body– must also be down to the eye of the photographer, Manuel Vason, and the synergy of the collaboration. There was also another collaborator in this image – Lucille Acevedo-Jones, a costume designer who works regularly with Shah, and who designed the newspaper dress for this Fool. 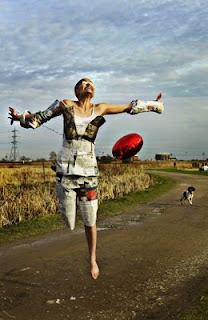 Like all the cards of the Major Arcana in this Tarot pack, the Fool is dripping with the residue of multiple and combined professional practices – the traces of as many professional practices, perhaps, as there are knowledge systems touched by Tarot itself. By bringing together this collection of people inside the rich symbolic web of Tarot , the project of the SPILL Tarot pack represents the working methodology behind the festival. As a whole, SPILL 09 was a collaboration between artists, producers, venues and audiences across a wide terrain – large theatres as well as site-specific spaces; performers familiar to London audiences as well as artists and work that was wholly unfamiliar; live art, theatre, performance, explicit bodies, music, dance, and much more. It brought artists to London from all over the world, and it did the same for audiences. As such, it reflected the vision of the Pacitti Company and its Director, Robert Pacitti. But SPILL was also woven from the enthusiasm, interest and sometimes controversy sparked in the minds and conversations of the people who participated by performing, producing or watching the work. Just like Tarot, it offered up glimpses of human experience, with the desire to be read and absorbed into others’ lives.

SPILL: Overspill was an attempt to respond to the energy and achievement of SPILL through writing that respected the form and content of the festival and its processes, and that developed with the festival over time. Together, the seven writers involved (David Berridge, Rachel Lois Clapham, Mary Kate Connolly, Alex Eisenberg, Eleanor Hadley Kershaw, Mary Paterson and Theron Schmidt) created 55 pieces of writing. As well as responding to the work as we saw it during the festival, Overspill writers investigated the processes behind the finished product – interviewing artists, visiting rehearsals, and in most cases developing a collaborative process with the artist. We addressed questions to the audience and, within the confines of free blogging software, we tried to experiment with form. There were three days of writing workshops, two peer critiques, a complicated group editing system and ticket schedule, and one all night live writing performance. Like the SPILL Tarot, each individual blog post represents a complex web of professional practices and collaborations; what you’re reading here is the first card in the deck. We hope you will shuffle your own way through, and use this site to crystallise your thoughts in response to the SPILL Festival. Please make comments below, or email opendialogues@gmail.com