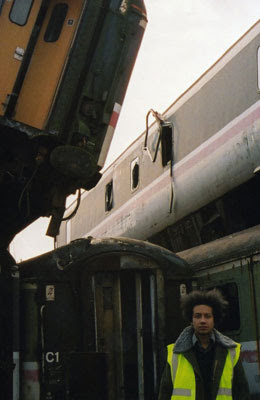 Robert Deacon: Good evening ladies and gentleman. For this evening’s performance of Prototypes, I have been commissioned by my son.

Robert Deacon: To play the part of ….

[Cue Robert on the Xylophone]

And so Robin and his dad, Robert, open the performance of Prototypes with a short turn on the xylophone and an air of formal ceremony.

Prototypes is a show that uses a working model railway as stage for a subtle play on autobiography, documentation and the passing of time. The model in question is a makeshift MDF section of British Rail track that is visible from the upper window in the former home of Robin’s Aunty Monica, in 5 Martin Court, Southall. This window was the one in which Robin stood as a child in his school holidays. Where he watched the Class 253 trains in intercity livery pass by. It is where he thinks he may have developed a love of railways and trains – even model ones - and where the fascinations with timetables started.

Robin re-enacts that childhood scene with his model - which includes a hastily blacked-up plastic figurine (representing Robin), stood in front of the cut-out cardboard window of 5 Martin Court watching the model trains. Throughout the performance, he also presents video footage from the original view upon which the prototype is based; we see First Great Western train services rumble past the window of 5 Martin Court, the actual flat from which his Aunty Monica has long since gone. When the trains are gone, the video records the empty, grey and wet stretch of Southall.

Robin wears a pair of dark running shorts and white T-shirt with the word OPERATOR on the back. As ‘operator’ he spends the first part of Prototypes sitting at a makeshift audio-visual desk at the back of the stage, hidden behind equipment, happily engrossed in twiddling various knobs and widgets relating to the model trains and the on screen video footage. At other times, he runs around the railway’s trestle tables an awkward, high legged canter, frantically assembling and disassembling the trains. Robin’s operational role on stage troubles the notion of utility versus its excess: performance. It poses the question, is it possible to merely operate or facilitate without performing? So too Robin’s operator ‘costume’ is functional, a workers uniform or a non-costume, but on stage this very functionality goes beyond appearance, it is seen to appear as performance. These paradoxical acts of erasure provide a glimpse into just how Prototypes - and in general how performance, as opposed to theatre - is complexly embroiled in function and reality. And although it is quite possible that Robin’s awkward run could be nothing to do with ‘performance’ at all, and more to do with Robin’s level of physical fitness, I suspect some camping is going on here too.

In contrast to all this (non)performance and train related chaos is Robert who, as third person omniscient narrator- or first person impersonator as he sometimes referred to by Robin- speaks the story of Prototypes with a wry, reserved demeanour that bears an uncanny resemblance to Robins’ own understated, satirical persona.

The story Robert tells is one of prototypes themselves - of equivalence, scale, representation and archetypal base form. These things are looked upon through the lens of the model railway, its language, politics and aesthetics. We are taken into the world of the model railway convention, where modellers – the vast majority of whom are white, British, retired enthusiasts - showcase in-depth miniature scenes. The models are strange amalgams; soil collected from the original geographic location, upon which mini lighthouses, railway sheds or outhouses are brought together to create an approximation, a picture postcard of quintessential Englishness. They are fictional but equivalent representations of a certain place and time. Specific re-enactments of an idealised version of the English countryside circa 1950’s; a sparsely populated (with white people) land of green and plenty. The prototype that emerges from all these models is troublingly utopian. Prototypes delves into these miniature aesthetics; a world in which 0.5 mm makes a difference, where aged, conservative model makers attempt (unwittingly or otherwise) to simulate a purity of experience, youth and Englishness, and scale things down in an attempt to exercise control over an increasingly uncertain world. Prototypes articulates railway models and their makers as unable to be apolitical, and their endeavours politically loaded. Megalomania and outmoded modernist tendencies concealed in the form of a harmless British past time.

Robin’s attempt to place himself (as mixed race, as young man, as artist) in this world - both in the fantasy English landscape of the models, and the world of the typical model railway convention goer – in his re-enactment inevitably fail. But it is the attempt or the acting out of the re-enactment that is critical. It is both political statement and recompense then, that Robin’s own model of Southall is very British in an everyday, post industrial way. His is a very different sort of English prototype: one that embodies the fact that quite often ‘nothing happens’, both in life and on railways, one that takes account of local immigration, (Robin’s) mixed British heritage as well as the wet grey reality of Southall.

A similar aesthetics of failure is also being re-enacted in Robin’s attempt, mid way through the performance, to simulate the timetabled operations of the 8.59 Network South East service running through Southall on 17 April 1990. It was an impersonation that was doomed from the start. The vigorous piston movements of his arms, his precise buffering gestures and grinding noises aptly demonstrated the infidelity of representation and the inbuilt failure of re-enactment; it will never copy exactly. But Robin’s actions show how re-enactment, in its enthusiastic and imprecise nature, goes beyond off the shelf or pre-fabricated representations or presets - replica trains, crafted figurines, tiny signal boxes - to create something that is more holistic, sympathetic and perhaps more akin to the original event, or prototype.

This gap between reality and re-enactment is a recurring motif in Prototypes. At one point, Robin starts the miniature train on its journey past the model no. 5 Martin Court. By the time the train rattles precariously past the prototype window, Robin has (just about) managed to clamber back over the set to stand centre stage in front of the video screen, upon which is a magnified live stream of Robin’s on stage Southall prototype. In that carefully choreographed (and nearly missed) moment we watch Robin, his back to us, watching his prototyped plastic self on screen watch the model train. It is a heady mix. One in which Robin views himself through the video projection of his own prototyped past. And we see the dialectical tension between being and self-identification played out through the different forms – body, prototype, video and documentary. First person impersonator, Robert, acts as mediator; he speaks Robin’s scripted words as his own. He blackens his (white) face and dons an acrylic afro wig. It is Robert as narrator through which identity is performed as dislocated, fragmented and performative in Prototypes, in short re-enacted, not authentic, essential and whole.