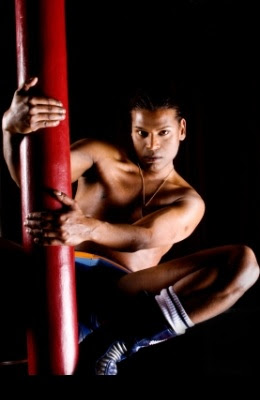 It was midday on Saturday 25th and I was walking through Soho Square Gardens on the way to an Overspill writers meeting when I first encountered George (a.k.a. exhibitionist and aspiring porn-star Johnny Shekontai). George, or rather Johnny, was wearing lace up boots, a delicate shiny cape draped across his shoulders, tight go-go outfit complete with tiny tight shorts and a skimpy top. It was cold and not a particularly great day to dance to Donna Summers’ infamous 1977 dance tune ‘I Feel Love’ for 8 hours on top of an 8ft high mock-stone plinth. But that’s what Johnny was going to do. And stood by the plinth, with cigarette dangling from his mouth, tight shorts, caped shoulders and various SPILL assistants fussing around him, he looked like a camp middleweight boxer about to enter the ring and undergo a gruelling bout.

Of course he was. But Johnny’s 13 rounds were not with a fellow greased-up sports professional trying to knock the crap out of him. It was with us, the public. He was disco dancing up there for our titillation, our delight. And his performance would be gruelling. Cold at first, later tired, sweaty and hungry. We would go about our busy day. Meanwhile, he would be there, still dancing, vulnerable to passers-by, their stares, their questioning looks. The question was would Johnny ‘feel love’ as Donna insisted she did, and would it last the whole 8 hours? Moreover, would we feel love for Johnny?

It’s 2pm. Donna is singing the same phrase laconically over and over again, her voice full of desire – for the song, for a lover, for any one of us here listening now. The drum beat and slight melody always pushing towards climax but never quite getting there; it’s a looped, tantric disco sex act of a song that leaves us excitedly on the edge – of dancing, of sex, of all those sweaty nights in clubs when you definitely did feel love, or something close to it. The music is infectious. I fight the urge to jump up and share the plinth with Johnny and relive my own go-go nostalgia of the 1990’s Manchester club scene. No, perhaps not sharing. The scene back then was quite competitive; what I really want to do is knock Johnny off the plinth and have the stage to myself. To feel love from strangers, if only for a moment.

Meanwhile, Johnny stares abstractly out into the middle distance whilst he bops around. He slips in and out of his groove. At times, his movements are energised, as if the mood has suddenly taken him or he has just noticed a camera trained on him and is showcasing his best moves. At others he looks bored and fatigued, as if he is trying to drum up enough energy to simply carry on. Passers-by stare, some dance around the plinth, clap and take photographs. Others munch sandwiches – oblivious- sat on the balding grass of the gardens. The temperature drops. It gets wet and grey. And Johnny dances on.

At 4pm the music is still pumping but Johnny is gone from the plinth. Is this supposed to happen? Has some over excited fan had him away? Or is he on a toilet break, gone for food? My mind wonders to thoughts of Johnny queued up at the Starbucks round the corner on Oxford Street, cuddling a latté in his silvery cape. I imagine him to be chagrined at the lack of green room or personalised trailer.

Minus Johnny, the plinth is no longer a fun podium for Johnny’s exhibitionist escapades, or a makeshift 8ft disco; it has a serious, formal air of a public sculpture. It looks lumpen, monolithic and uncannily like the base of the military, valedictory and male historical statues just round the corner in Trafalgar Square. I Feeeeel Looo- ooo- ooo- ve. ...I Feeeel Loo- ooo- ooo- oo- ve bounces rhythmically off its cold surface.