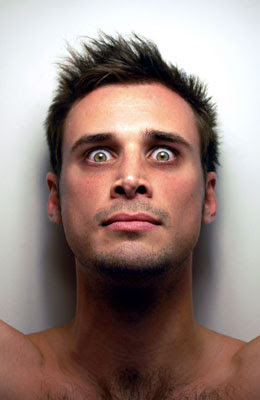 Part 1. David Young’s Breath Control for clarinet, water sports, and 44-gallon drum. Richard enters the first of four platforms in a schoolboy uniform, including small shorts with the front unzipped. He proceeds to play the clarinet in close variations on a single note using a circular breathing technique; replenishing breath by breathing in through the nose but continuing to sound the note by blowing through the mouth using the air stored in the cheeks. Occasionally he dips the nose of the instrument into a 44 gallon water tank. Still playing, he stands in a bucket and unceremoniously wets himself, urine trickling down his legs, a dark patch slowly growing over the shorts. The fetish seems to be one of desire, boyhood and urination. A paradoxical sexual fantasy of childhood accidental pant-wetting deftly enabled mid recital by Richard’s prowess as an adult performer.

Part 2. Richard Barrett’s Interference for contrabass clarinetist. This sees Richard don an elaborate headdress and stand behind a perspex screen revealing his lower half, which is naked save for a cock ring. The voice performance in Interference ranges from high falsetto squeaks to extreme bass grunts, finished with contrabass clarinet flourishes. The presence of a cock ring and stage waterproofing could be a worrying prelude to more watersports but no urinating ensues. The fetish is one of voyeurism and the transgendered body or voice; the male genitals contrasting with the typically feminine range of high notes Richard produces.

Part 3. For Chris Dench’s The Sadness of Detail for clarinet and operating table Richard emerges with a wreath on his head, wearing small underpants and a few strategically placed leaves. His body is wrapped tightly in cling-film. His movements on the table resemble an imp or lusty Pan-like character. The performance is virtuosic, and the clarinet sound is often distorted at the end of the phrasing due to the constriction of Richard’s breathing. The fetish is of purity, the naturalness of youth and innocence set against oncoming acts of bondage and asphyxiation.

Part 4. David Lang's composition Press Release for leather and bass clarinet is more identifiably jazz-like and the playing involves a lot of tongue slapping and vigorous sounding of the bass clarinet’s keys instead of the musical notes they play. Whilst playing, Richard enacts a queer Bob the Builder fetish in tiny blue shorts, boots and yellow hard hat, climbing arse first up a wooden ladder.

In-between these parts, the lights are lowered and Richard’s recorded voice, mixed with the sounds of wind blowing and wood cutting, reveal the intimate pleasures of playing music. ‘It feels like desperation - when the body is at its limits, it feels like the rush of caffeine, it feels like throbbing, or being erect.’ These interludes are moments of pillow talk; of sexual confessions shared between lovers in between climactic performances. In them, my mind wonders to Richard backstage, hastily shedding the previous costume - and fetish - and preparing for the next performance. I find I want to see him in these private, half dressed moments and fear I am developing my own voyeuristic fascination, or fetish, for him as a performer.

Incomprehensibility definitely plays a part in Listen..., which stands out as bizarre and different even in the context of the experimental work at SPILL. This difference is one of context and audience for his avant-garde work, of which Richards says, "Musically I have a great interest in contemporary music, but I realise most people don't. Every man and his dog aren't going to come and hear me do a recital of left-of-centre music. I want to rouse concert goers.” But incomprehensibility is also critically important, “it's no surprise that the music [in Listen...] should be at times incomprehensible as the myriad manifestations of fetish-influenced sexual practice are often just as baffling”.

The music in Listen... is at the very edges of understanding. There are no previous styles or traditions being ‘riffed’ with, no travesty being made. It is music of the 21st century; without history, its own sealed and virtuosic fetish. Each piece is rhythmically irrational, it sounds like improvisation or extreme loose-association but is in fact a tightly crafted composition. Three of the compositions already existed. But one came out of a unique performer/composer collaboration in which Richard gave David Young the basic ‘instrumentation’ or four part score of clarinet, urine, 44-gallon drum and amplification, and David went away and composed Breath Control. The collaboration and the resulting performed composition gives a glimpse into the perverse rigors of the contemporary music world. Richard’s four part instructional score of ‘clarinet, urine, 44-gallon drum and amplification’ remains a tantalising call to others to develop their own fetishized encounters with urine and clarinettists.

Listen… is also broaching relatively unexplored ground in terms of musical performance related fetish: both the attributing of inanimate objects with mystical qualities, and the sexualizing of objects or body parts not traditionally seen as sexual.

Fetish also seeps across the different physical forms in Listen... with breath enacting a subtle transfer of erotics. Breath sounds the body of the instrument and is then sexualised on its return into Richard’s body-in-performance. Breath becomes the vehicle through which Richard’s body is highlighted as porous, and the medium with which he practices the sexualised transgression of instrumental, bodily and musical limits. His circular breathing troubles his body’s natural flow by simultaneously breathing in and out, producing and consuming breath at the same time. The regularity of things in and out of the body is further unsettled by simultaneously urinating; performing on demand (and on stage) what is normally a natural, private evacuation. The flow of oxygen into the body – or rather the lack of it – is further fetishized by the sexual practice of asphyxia.

After the performance finishes I wander, feeling baffled but (a)roused, into the toilets. The Eau de Shunt pervades the multi-sex set-up; cubicles big enough for two, graffitti’d walls, dubious puddles on the floor emitting a strong stench of wee. Richard is at the central washbasin, washing his hands, presumably having cleaned himself of his urine. I introduce myself. As we shake hands, he looks into my eyes and crushes my fingers in a vice-like grip. His precious, highly trained musician’s hands with their long, smooth fingers know the infinitesimal subtleties of pressure. This is a truly talented man who can sound a body in a myriad of ways. Stood there, in urine, in Richard’s experienced and dexterous hands, I realise my own secret fetish is complete. The score for Listen, My Secret Fetish is performed once more.