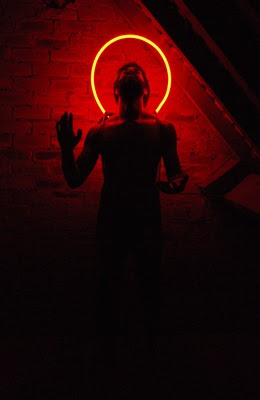 There’s no telling what might turn up in some corner of Shunt Vaults, the huge network of railway arches that comprised the venue for the Triple Bill. After the woman painted in gold, and the man urinating whilst stood in a bucket playing the saxophone, there was a bit of standing around on Triple Bill night, before heading off to another dark corner, where Harminder Singh Judge rounded off the evening stood in a lake of slowly curdling milk.

Judge was in the middle of the lake of milk, slowly rotating on a small round wooden disc. Around his waist was a girdle of neon writing. For maybe forty-five minutes he slowly rotated, churning-tubes dangling from his body into the milk, drone-music blaring, the durational hook for the audience of slowly making out the sentence of neon words as he turned.

It was absorbing, if demanding stuff at the end of a long evening. Judge had a serious, focussed look throughout and there was a definite, challenging sense from the off that this was it for the duration. How long does it take to make cheese I wondered? I had no idea. Were we here in Shunt until this sloppy lake became a hard cheddar-like mass? It seemed unlikely. But duration is tricky to relate to necessity - on the second night the show was shortened, I heard, by twenty minutes.

At the end of an evening of intense, focussed performances I was finding it hard to concentrate. But maybe that was the point of such a performance. One’s mind wandered and drifted and when and if it returned there was Judge, another twenty degrees on, the sentence a few letters closer to revelation, if you hadn’t forgotten what the bit before had said and needed to wait for the whole thing to come round again, like me.

I’m being deliberately a bit flippant about this. There was a serious and challenging presence to this work, an engagement with rituals and Hindu traditions I knew nothing about, but which also were well aware of the slightly ludicrous situation in which they found themselves, both SPILL and Shunt Vaults and performance art more broadly. This isn’t my flippancy alone I’m talking about here - it’s how the piece worked the flippancy into both its seriousness and its wannabee cheese.

So somewhere in Shunt there was the Hindu myth of Churning the Milky Ocean, where Mount Mandaranchai was the dasher (churning tool) and Vasuki, King of serpents, was the churning rope (thankyou Wikipedia). If Singh’s body formed one layer of commentary on this source, there was another accretion in store. Two figures in white appeared at the lakeside, barefoot, wearing drums. They stood calm and posed, although around them stewards were busy spreading out blue hand towels, ready for drying their milky feet when they re-emerged.

I was struggling - whilst watching and again, now, whilst writing - to find another vocabulary for this - that acknowledged the specific types of drums and clothing. But I didn’t have the words. Then it happened. Revelation! Transcendence! Well, actually, no, or, rather, yes, if transcendence relates to a sudden soundtrack shift into Depeche Mode’s Personal Jesus, the two white robed guys playing along on their drums. It was a dramatic shift, hugely energising. The man next to me was mouthing along happily; feet were tapped; time became more familiar again. It was up to Judge to maintain the continuity, keeping the same mental focus, rotating, churning, same as ever, absorbing Dave et al into his concentration.

As well as enormous well-being, it was curious to think what happened in this shift towards Basildon’s finest. Partly, it was, after Jeremy Deller and Nicholas Abrahams feature documentary The Posters Come From The Walls, further assertion of Depeche Mode’s art-world renaissance. It was an assertion of connections across cultures and styles, the continuities and the differences. It also functioned as the eventual punch line to a long and drawn out joke, as, too, a sense of the age of the 1980’s as the great Thatcherite age of cheese production. I imagined the same performance crashing into a Stock, Aitken and Waterman track.

All well and good, but still no cheese. It was curdling more the second night, apparently, and I should have known better than to expect actual full scale dairy production from performance art. The performance ended with Harminder still the same as ever in the middle of the lake.

Feeling a bit of a Peeping Tom, I hung around to see how he made it out, the mundane after the ritual. I won’t tell you. There was no need to do this, really, other than a kind of backstage nosiness. His performance had itself explored this kind of interconnection, whilst avoiding any of the pitfall binaries such as on-stage and off, west and east, process and product, milk and cheese.