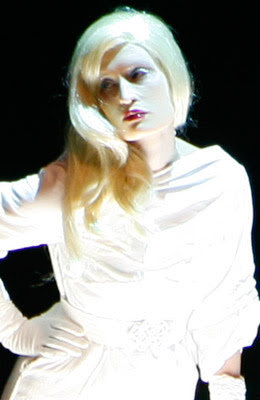 The hymn Amazing Grace, oft associated with the spiritual heart of America’s South, was in fact written by an Englishman, former atheist, and ex-slave trader, John Newton. The Native American Cherokee, during their forced exodus to the West of America known as the Trail of Tears, are thought to have sung it as a hastily performed funeral rite, when proper burials of the dead were not possible. Amazing Grace was popular with soldiers on both sides of the American Civil War. Versions have been recorded by Elvis Presley, Johnny Cash, and Joan Baez.

Thus when Rajni Shah began first to hum, and then sing the hymn during Dinner with America, the tune resonated not only with her immediate surroundings, but with a host of American presences and absences which the work sought to evoke. A sense of ritual, redolent of a religious rite, permeated Dinner with America. It seemed a meditation not merely on American people or culture, but on America itself as an animate being: vast, perplexing and potentially intangible. Entering the performance space I was struck by the hushed concentration of the onlookers who picked their way through channels of powdery soil which criss-crossed the floor, or crouched in darkened corners to survey the scene. It appeared we were all implicated in this rite – a calling up of stories, ideals and images that we each could muse upon as we wished.

From the four corners of the stage echoed recordings of American voices – young, old, American born, immigrant, affluent, homeless. Speaking with pride, shame, ardour, and disillusionment, they wove a varied and contradictory patchwork of what America meant to them as individuals. And in the centre of this stood the figure of Shah, swathed in a white veil and bathed in light; an icon around which we had gathered to venerate.

After a time Shah emerged to reveal long white gloves, a voluptuous blonde wig, floor length white gown, and a fixed, inanimate white face. The image was beguiling; ‘beautiful’ in a stereotypical sense, yet utterly grotesque and filled with artifice. Ensnared by the spotlights, she stood erect and unmoving, with the static posture of a shop-window mannequin. From time to time she would alter her stance ever so slightly, to disrupt the tableau and set a new one in motion. Hands on waist in a bored gesture of defiance would evolve into a heroic stance with one arm stretched aloft, and back again. And all the while Shah sang that iconic tune, in a catalogue of styles ranging from husky sexiness, to patriotic defiance. The Statue of Liberty, Marilyn Monroe, cosmetically altered features, blonde ambition, beauty, strength, power. All these notions swirled above this perplexing apparition - a provocative embodiment of a geographical and cultural landscape.

In many ways, Dinner with America was a methodical peeling back of the layers of a country. Not in an effort to reach its core necessarily, but more to enjoy and explore the artefacts unearthed, fully in the knowledge that a myriad more always lie beneath. Being aware of Shah’s physicality underneath her white mask enlarged the words of a Mexican man who said he had never known racism until he crossed the border. The desire to peer beneath the glittering exterior of the performed image was equalled by the need to hear his and other stories; realities utterly at odds with the glossy white shell of the USA. This was furthered when Shah seductively slipped off her white gloves and gown to reveal not white, but brown skin, clad in a sequined short dress and gaudy platform boots of red white and blue. The shimmering white layer of strength had been sloughed off to reveal a body that was complex, othered, exoticised, negated and unmissable, all at once.

By this point in the work, the burden of continual singing was beginning to show in Shah’s strained voice, cracking and gasping for breath as she intoned the hymn repeatedly. Her posturing became aggressively sexual, pleading for attention, trying to assert a power and allure, fast slipping away. It felt almost that a scab had been picked off, revealing an ooze and decay often obscured – histories erased, forgotten, erupting now to the surface…

The ultimate and last transformation was performed in silence. Voices had faded away, flashing gaudy lights were now steady and fixed. Slowly Shah removed dress, boots, false eyelashes, and finally, peeled off the latex mask to reveal her own face. Perhaps unsurprisingly, this intimate public act seemed on the one hand humbling and raw, but on another, filled with strength and poise. The final layer: unadorned and vulnerable, but freed from the burden of artifice and expectation.

Completing the sense of ritual in the work, a feast then began, in which everybody was invited to share. Silver platters spilling over with chocolate, fruit and nuts were carried onstage and the previous hush of the audience was broken as people came together to eat, and to chat. A literal ‘Dinner with America’. In this simple action, a final facet of that vast landscape was conjured. One which resonates with the positive sentiments of Amazing Grace. One which whilst occasionally lost amid a quagmire of division and hatred, nonetheless courses defiantly through the conflicted, loving heart of America.

Mary Kate is a freelance writer on performance and live art, based in London.